Welcome to my private homepage • computer scientific subjects and more

fix the jar association on Windows

If you doubleclick on a jar file, and your Java application does not start, your .jar association has been hijacked. You can fix the problem with Jarfix.

The problem ...
The root cause for the problem above is, that a program has stolen the .jar association. If you have installed the Java Runtime Environment the first time, the file type called "jar" is assigned to javaw.exe correctly. "jar" is an abbreviation for "java archive" and javaw.exe is the correct program to execute a .jar. However, on Windows any program can steal a file type at any time even if it is already associated with a program. Many zip/unzip programs prefer to do this, because a jar is stored in the .zip format.  If you doubleclick on a .jar, your pack program opens the file, rather than javaw runs the program, because your pack program ignores the meta information which are also stored in a .jar. In the Oracle bug database there is the low-priority report 4912211 "add mechanism to restore hijacked .jar and .jnlp file extensions", but it has been closed as "Closed, Will Not Fix".

You may also miss the file connection with .jar if you are using a free OpenJDK without an installer.

The workaround ...
Reinstall the Java Runtime Environment or fix the Windows Registry manually each time this problem occurs.

The solution ...
You can fix this problem very easy with the small but reliable

jarfix.exe program. Just doubleclick on it to restore the .jar association with javaw.exe. 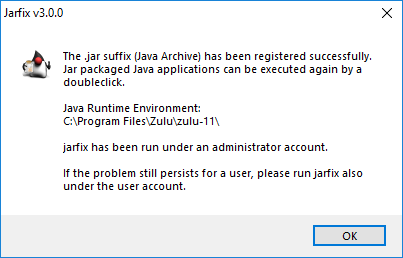 
Many parameters can be used together, for example "jarfix /64 /a /k /s /l" starts the program without any dialogs (/s), searches for a 64bit JDK only (/64 /k), recreates the file association with jar, creates a junction called latest (/l), and adds the menu item called "Run as administrator..." for jar files to the conext menu of the Windows Explorer (/a).

In order to feed jarfix with an alternate configuration file, simple create a file that has the same name as the .exe, but with .ini extention. The .ini file has to be in the same folder where the .exe is stored. With that config file you can fully control the action that should happen if you double click on a jar file. Options specified on the command line are concatenated with the options specified in the config file. Both detailed instructions and examples can be found in that sample configuration file.


Jarfix Copyright © 2002-2019 by Dipl.-Inf. (FH) Johann Nepomuk Löfflmann
Jarfix is freeware and it has been published under the terms of this license.

jarfix is freeware. You can use it on any Windows computer. You don't need to register or pay for jarfix.

Why should I use jarfix?
If you have started to modify your registry manually and it still doesn't work for you, feel free to use jarfix. jarfix can fix the issue fast, comfortable, complete and correctly. There is no need to touch the registry manually.

How can I launch jarfix so that the message dialog does not appear?
jarfix /s

I have a 64 bit Windows and only installed a 64 bit JRE, how do I launch jarfix in that case ?
jarfix

How can I fix the issue if I don't have admin permissions ?
cmd /c "set __compat_layer=RunAsInvoker && start jarfix /u"

I have installed many Java Runtime Environments (JREs) on my computer, how can I select a specific JRE for .jar files ?
Create a configuration file called jarfix.ini, add the property "actions", and start jarfix.

Can I use jarfix in a commercial organization?
Yes.

Can I deploy jarfix.exe with my program (free or commercial)?
Yes.

Can I put jarfix.exe on my homepage so my users can download it from there?
Yes, but in my opinion it is smart to add a link to this website so your users can find this website with FAQs, documentation, etc. and also the latest and greatest jarfix.

Do I need to mention your name or your website?
No, but I like it if you do it.

I would like to recommend your site/program, is this ok?
Yes, absolutely.

I found a site which claims that jarfix is GPLed.
jarfix is freeware which is different to "free software". Jarfix was never released under the terms of the GPL.

Can I have the sourcecode?
No.

I have got a message called "The publisher could not be verified. Are you sure you want to run this software?" What does that mean?
If you download files from the internet to a NTFS formatted partition of your disc, Windows adds so called Alternate Data Stream metadata information to those files. This metadata can only exist on NTFS filesystems and indicates from which Security Zone the file was originally downloaded. If you try to start an executable from there, you will get the warning above; files downloaded from the internet could be dangerous, you know. You can remove the metainfo by copying the file to a non-NTFS filesystem (such as a floppy or an USB stick) and then copying it back over the original file. Stream data is not preserved on FAT or other non-NTFS volumes, so copying the file there strips off the metadata - Security by "specialists", you know ;) At the command prompt you can also remove the the ADS metainfo from the NTFS filesystem - just in case you haven't a FAT formatted volume. In order to verify the integrity of the jarfix binary, I recommend to calculate digital fingerprints and check those with integrity tools like Jacksum. Digests for jarfix are printed at the download section.

January 27, 2019
jarfix.exe v3.0.0
- from Java 11, Oracle does not provide a dedicated JRE anymore, only a JDK,
therefore for x64 and JDK 9+, jarfix 3 will search for a JDK first and then for a JRE, otherwise the latest
Java Runtime Environment could not be found if both JDK 11+ and a JRE version < 11 are being installed
- for Oracle JDK < 9 or on 32-bit platforms, the mature search strategy remains unchained
- added option /k in order to search in the Windows Registry only for a JDK and not a JRE
- added support to find a JDK from Azul Systems in the Windows Registry
- added option /z in order to search in the Windows Registry for a JDK from Azul Systems only
- added option /l in order to create a link called "latest" that points to the
latest JRE/JDK. The symlink will be stored under the JRE/JDK's parent folder.
- removed option /c, because a more comfortable solution exist: if a <jarfix>.ini file exists,
it will be read by the <jarfix>.exe; simply replace <jarfix> with a name of your choice.
That way you can call jarfix with different configurations without the need to go to the command line.
That feature is also useful for setting up a .jar file association for an OpenJDK bundle
that doesn't come with an installer (e. g. the OpenJDK from jdk.java.net or AdoptOpenJDK.net)
- changed all links from http to https

March 11, 2012
jarfix.exe v.2.0.0
- support for detecting a 64 bit Java Runtime Environment on 64 bit Windows
- option to search only for a 64 bit JRE if both 32 bit JRE and 64 bit JRE are installed (/64)
- option to fix the issue even without admin permissions (/u)
- option to read from a config file in order to fully control the action that happens if you double click on a jar file (/c)
- option to add the menu item called "Run as..." respectively "Run as administrator" to the context menu of the Windows Explorer in order to execute .jar files under the administrator account (/a)
- option to set an alternative program icon for .jar files (/i)
- option to extract a tiny Java program called jartest and the licenses for both jarfix and jartest (/x)
- the jarfix logo has been used for the program icon
- the title JarFix has been renamed to Jarfix

October 21, 2006
until today jarfix has been mentioned on the FAQ page only, now jarfix has also a homepage

July 30, 2005
jarfix.exe v.1.0.0
- english and german dialogs
- checks whether a JRE is available, if not it asks the user whether the user want to download a JRE
- determines the latest version of any installed JRE
- restores the .jar association with javaw.exe
- sets a Java icon for the .jar files

May 1, 2002
Before jarfix.exe went live, I have pubished the jarfix.reg on my homepage.